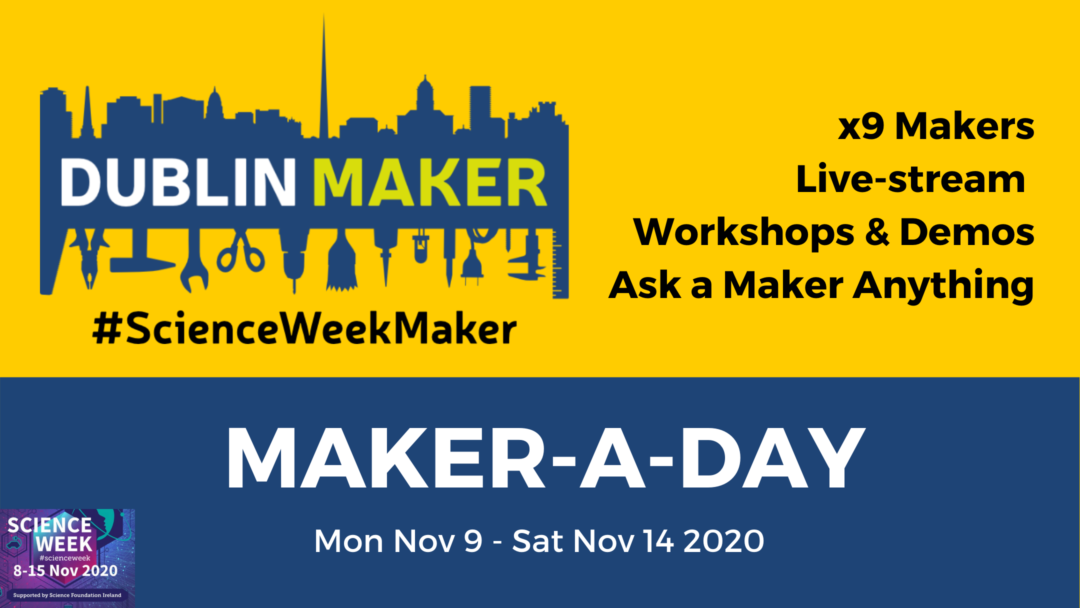 Dublin Maker is excited to bring you our first virtual event this year, a series of demos and workshops called Maker-a-Day during Science Week.

Maker-a-Day will be on from Monday November 9th to Saturday November 14. The schedule will be announced once we finalised times with our Makers.

Featuring traditional crafts to technologies, there’s something for everyone to follow, make and build.

We have a 10 min Q&A after the workshop where you get a chance to ask the Makers questions, and it will be live-streamed via our Dublin Maker Youtube channel.

We launched our mini-open call a couple of weeks ago and we received great response, and we are delighted to announce who will be participating at our Maker-a-Day during Science Week (in alphabetical order):-

Nathan Wheeler will be making a small scale diorama of a country road, small enough for the table top. This will be a showcase of simple modelling techniques to make a simple and easy to enjoy diorama, replete with a nice custom made tree.

Stuart Lawn will demonstrate how to use Tinkercad to generate your own digital Lego Models and show some secret TinkerPowers built into Tinkercad to get the step by step instructions for you to build them from real Lego bricks.

This project will show how a simple game can be made for the (unofficial) Dublin Maker Badge 2021. It will be a sprite based game that will run on the badge.  It would be great to include the game produced by one of the participants in the final badge.  Frank plans to put together a simulator that will allow participants to build their own simple games in a Windows/PC environment.

Jellylab (University College Dublin): How do sea creatures react to light? How to build a simple experiment to explore the world around you.

We believe that anyone can be a scientist, and we want to democratise discovery by taking experimental tools out of the laboratory and into the hands of anyone curious about the world around them.
This project will show how to use simple and easily available components to build an experiment to answer a scientific question: if tiny sea creatures have eyes, what do they do when they see light? For this we’ll use brine shrimp (also called Artemia), which are sold as “sea monkeys” and “aqua dragons”, as well as some tiny plankton we collect in the sea, but you could also adapt this to investigate bugs from your garden (how do ants or spiders respond to light?). The experiment can be run using an arduino controlled neopixel RGB LED ring. We’ve been using this as a demonstration for some time now, and  documented the experiment here: https://www.youtube.com/watch?v=9dDiRWTvLzI
Now, we want to show how you can make everything you need to do this type of experiment yourself. We’ll show you how to set up the lights with an arduino, and how to control the light pattern with a game controller (specifically the nunchuck controller from a nintendo Wii).
In addition to showing how to make the light experiment, we’ll also show how to build a system to hatch your own brine shrimp, and how to collect tiny plankton from the sea that can be used in this experiment. FInally, because some of these creatures are really tiny, we’ll also show how to make really simple, cheap “microscopes” to make the invisible visible!

While are all working from home these days, our ergonomic work environment has been left behind. James Clifford created a laptop stand which raises the laptop to the correct height and also folds away when you’re not using it. It also becomes a case for your keyboard, mouse and other peripherals when folded.

Participants will need to try and build a tower made from paper. However, NO tape or other sticky materials can be used… JUST paper! Oh, did we forget to say it should support at least a 100g weight? 😉

South Dublin Radio Club will build a 137 MHz V-dipole receiving antenna for weather satellites – and demonstrate it in action by decoding Weather Satellite images (if we get a conveniently timed satellite pass!)

We are finalising the Maker-a-Day programme, so keep your eyes peeled and ears open when we announce the dates and times for all our aforementioned fabulous Makers.

And don’t forget to subscribe to our Youtube channel and hit that notification bell so you know when we go live with Maker-a-Day each day during Science Week.