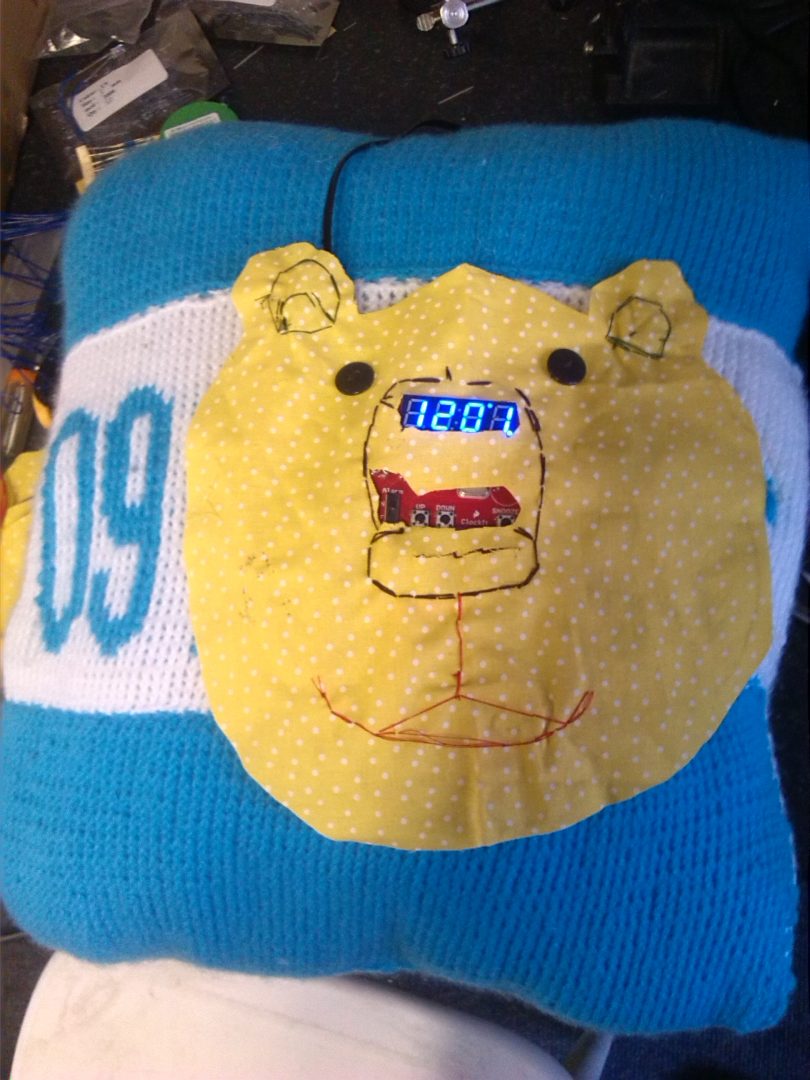 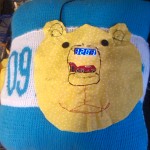 The Mobile Alarm Clock Pillow (aka Smart Pillow) is a belt that can be wrapped around a pillow (or anything else) to serve four purposes:

The idea came to me because I struggled to find a decent radio station when I wanted to set my radio alarm clock at home. I hated waking up at the sound of super-crappy music or, even worse, advertisements. Also often, in my messi apartment, it happened that the clock display was obstructed by some other object (probably left there by myself in a Freudian lapsus 😀 😀 ) thus preventing me to know the time. “Of course” that was the “only” reason for me being late several times! ;D

The project makes use of a LilyPad Arduino main board, LilyPad battery holder, LilyPad LEDs, LilyPad Vibe Board and SparkFun ClockIt. I shaped it as a disturbed bear: on one side it is cute and on the other side (the back with all the cables and component) it’s a monster :p 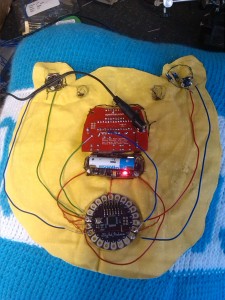 While realizing this project I’ve learned a lot in terms of designing (how to best positioned the components to avoid messing up the circuits and still keeping a nice shape for the audience) and in terms of soldering. I thought soldering was not a big deal. But that was only because what I thought was a good work, it actually wasn’t. Once working on a slightly more complicated project, your soldering is either very good or it may screw up the whole thing! And ain’t easy! More than anything else, though, realizing this project led me into the “just do it” philosophy that gives a lot of satisfaction and lets you achieve many targets.

I play around with sensors (although focusing more on their descriptions than on the hardware) for my PhD in Computer Science which I plan to finish this year at INSIGHT, National University of Ireland, Galway (NUIG). I’m a member of 091Labs, the awesome Galway Hackerspace which hosted most of my hands-on work for this project. I’d like to thank Alanna Kelly, from 091labs, who helped me with the soldering. And…I love Ireland 🙂