📢 We are delighted to announce that Dublin Maker (and DCU) is a partner on an Erasmus+ Programme called ASSESSMAKE21 (thanks to Mairéad Hurley from Science Gallery Dublin for connecting us to Learnovate who is the main drive of the project). Maker Advocate, Vicky Twomey-Lee will be point of contact on behalf of Dublin Maker.

🗓 Dublin Maker will be planning the first multiplier (information) event at the end of Jan 2021. Keep an eye out when we will announce the registration page for the event, it’s free to attend and will be online. If you are an educator, Maker, organisation that work with kids and youths, thinking of forming a Makerspace or having Maker activities in your community, library, school, club, etc., this is an event is for you!

Below is some info about ASSESSMAKE21 (the website will be coming shortly).

As the maker movement is increasingly adopted into K‐12 schools and nonformal makerspaces, students have more opportunities to generate unique, personalized projects and artifacts, such as computer programs, robots, DIY electronics and to develop new competencies and skills.

However, assessment of these higher order skills is not easy, particularly within these open-ended environments where students create unique solution paths to problems, interact with peers, and act in both the physical and digital worlds. Currently, digital technologies offer novel methods and solutions to assess the 21st century skills and offer insights to learners’ efforts and achievements that become available for both learners and researchers. Thus, the goal of this project is to provide, pilot and validate novel assessment methods and tools intended to use for the assessment of 21st century skills.

The assessment solutions will be piloted in different learning contexts but focused on makerspaces (schools and nonformal ie the makerspaces will be either currently located in Schools or will be nonformal spaces whose programmes engage with School groups). The project partnership will run learning environments that will enable students to act as makers using a wide variety of physical and digital tools through hands-on experiences that emphasize collaboration and creativity following inquiry-based approaches instead of direct instruction of facts and formulas.

Teachers and non-formal educators will receive training and will be highly involved in planning and implementing the activities.

Finally, the project will report findings and conclusions from implementations and assessments that will take place in 5 schools and 4 non-formal maker spaces in 4 countries. 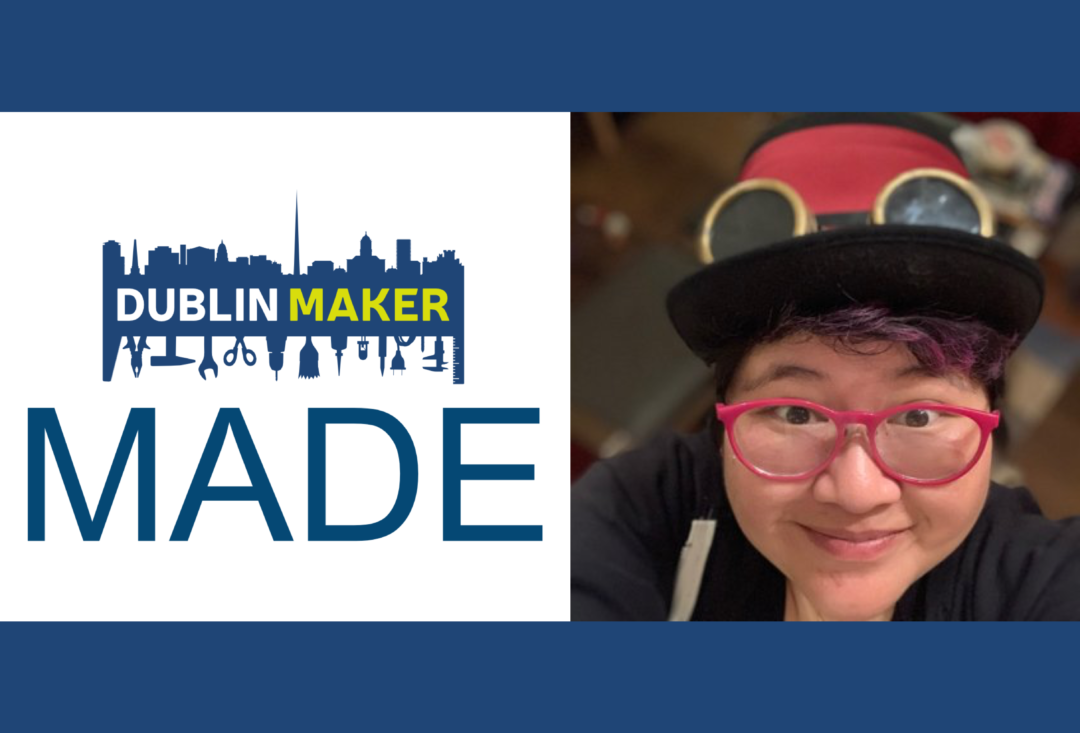 It’s been 4 months since I started as Maker Advocate with the Dublin Maker Team on the MADE programme.

What have I’ve been up to since besides settling into my office space courtesy of DCU School of Computing? And yes, I’ve got a great window view.

One of my jobs is being the admin person during working hours. I’ve been learning the ropes of the internal systems handling things like invoicing, expenses and so on, as well as various different paperwork required for Dublin Maker festival. This gives the rest of the team some breathing space to concentrate on community content for Dublin Maker itself.

Some might think admin is the least fun thing to do but it’s something I know will come in useful. For example, working in an institution handling paperwork, planning with the team and working with a production company running the largest event I ever got involved with. This year’s festival was much bigger than last year’s numbers which were around 10k visitors.

It’s just like when I asked to join the EuroPython Society as one of their board members just so I can see how they run a European conference that was at the time twice the size of our first PyCon Ireland back in 2010. Come to think of it, they are still just over twice the size even though PyCon Ireland has over 500 attendees nowadays. There was a lot of tele/video conferencing, processes to be put in place and agreed with, remote working with lots of other remote workers and we were all volunteers. Same when I joined as member of WITS Ireland and agree to join their executive committee as I want to be part of a team to make major changes and revise the vision and mission of the organisation back then. I learn a lot each time I join a committee whether it’s large or small, remotely or in the same room, to see how things work behind the scenes.

So the long and short of it, I secretly enjoy the admin side of things because I’m learning so much from each experience, and it’s different every time with lots of various challenges and new terminology.

Aside from that, I met lots of people, and as an advocate, it’s part and parcel of my role. It’s an expansion of what I normally do as diversity in tech advocate and tech community organiser anyway. Building on top of pure techie community, I now engage with more Makers from various hackerspaces, makerspaces, FabLabs, educators, creatives, not-for-profits, those involved with social good initiatives, public services and more.

I’ve met/talked/caught up with many people along the way including (not in any particular order, apologies if I missed anyone out):-

And not forgetting all the various folks who applied to Dublin Maker festival this year, this was their first time encountering me as their contact. And it’s just as electric dealing with them as with all my other voluntary not-for-profit activities.

I’ve still many hats on from my volunteer initiatives like Coding Grace, PyLadies Dublin, GameCraft, Women Who Code Dublin and Women in Technology & Science Ireland. Via various meetings with organisations that want to get involved with these I also talk about my current role as Maker Advocate which inadvertently brings me to new conversations on Maker culture such as the amazing Analog Lab that’s in Facebook Ireland which I had a quick tour of. It’s great to see things moved along since, and I got especially excited seeing their internal events as well as their designer in residence programme. I’m also a member of a women in games group called Strawberry Collective and offered my help as Maker Advocate and see what cool things we can do.

I’m also the Maker Track captain for Startup Week Dublin, a community-driven event, and I hope to bring MADE and our maker community to be part of this week during Oct 21-25. A way to bring two communities that would benefit from each others skill sets, plus with LEO from DCC supporting it, they have many clients that are small indigenous crafting/making businesses themselves. These are but a few things that I’ve been up to since I started in April.

Recently I went to Lough Boora with other creatives from all sectors, it was sort of an unconference, and it was people I knew from my various diversity in tech events and attending conferences like Inspirefest and workshops like PiCademy. The dots are all connecting between my past, present and future. I hope that I can use my existing connections and bring that to the table and link up with new ones, and the end result will hopefully a series of social outreach/impact events as part of MADE in the coming months.

Juggling calls, meetings and some little bit of travelling has been great so far, part of the project brings me and MADE closer to reaching under-represented communities and hard to reach areas with huge thanks to Dublin City Council Public Libraries partnering with Dublin Maker and recently launched a Maker Van at Dublin Maker this year. This was converted from one of their mobile library/learning vans.

Now what are my next steps, you might wonder?

I plan on getting a series of events as part of MADE working with many of the folks I mentioned above. I’m also looking into having a documentary produced about MADE, producing a series of podcasts, find a digital way to easily connect various makers, groups, organisations, institutions, companies, learn more about evaluation, meet all the stakeholders. Plus I will need to look into and researching more about fundraising, and plan on how to realise as many items on the bucket list that went into the application for the Science Foundation Ireland funding from now till 2020. Oh, and I have started thinking about Dublin Maker 2020 which is going to be back next July and hopefully at Merrion Square.

I’m still open for ideas, conversations, and collaborations for MADE, if you have any questions/feedback, you can contact me at vicky@dublinmaker.ie. 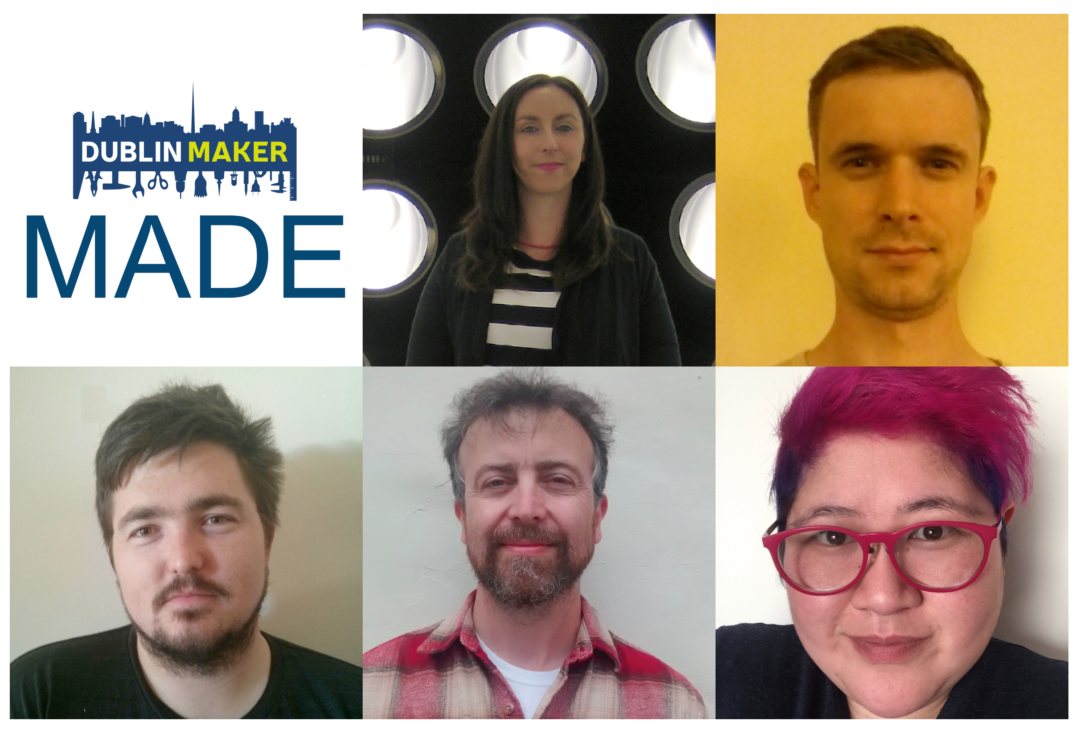 Announcing MADE, a two-year Dublin Maker programme funded by Science Foundation Ireland and hosted by Dublin City University which seeks to knit together a currently fragmented regional maker scene through the introduction of a series of initiatives coordinated by our newest member, Vicky Twomey-Lee as the Maker Advocate. These include festivals, public maker space roll out, mobile makerspaces, corporate engagement, training for all and dissemination.

The MADE project has as its objective, the better embedding of maker culture thinking at all levels in Irish society and making it available to all. Starting with the greater Dublin region, building on our successful maker festival, the Maker Advocate will foster and support makers where ever they are and for the benefit of many. We have identified and target a wide range of activities for the life-time of the project which will act as the means for creating the impact we expect to see. The most ambitious of these activities is a partnership with Dublin City Public Libraries to roll out public maker facilities in public libraries. The mobile maker space will be used to facilitate making events with other key target groups including people with disabilities, older people and minority communities – all of which are underpinned by identified and committed community partners.With significant dissemination and campaigning, we envisaged a longer term future sought through better corporate social responsibility engagement with the specific partners.

The Maker Advocate position provides a focus point and year-round voice for the maker community and those seeking to integrate such thinking into their activities from public libraries, through educators, nonprofits and commercial entities.

“I’m excited to be part of the Dublin Maker team and the MADE initiative. Looking forward to connecting the community and bringing Maker culture to all areas of society.” — Vicky Twomey-Lee, Maker Advocate

P.S. Our open call has been extended for Dublin Maker this July. We are looking for educators, tinkerers, hobbyists, engineers, artists, science clubs, students, authors and commercial exhibitors of all ages and backgrounds. It’s our mission is to entertain, inform and connect the makers of Ireland, while inspiring the next generation of Ireland’s makers and inventors and we want you to be part of it.

Apply before May 15th. http://www.dublinmaker.ie/open-call/