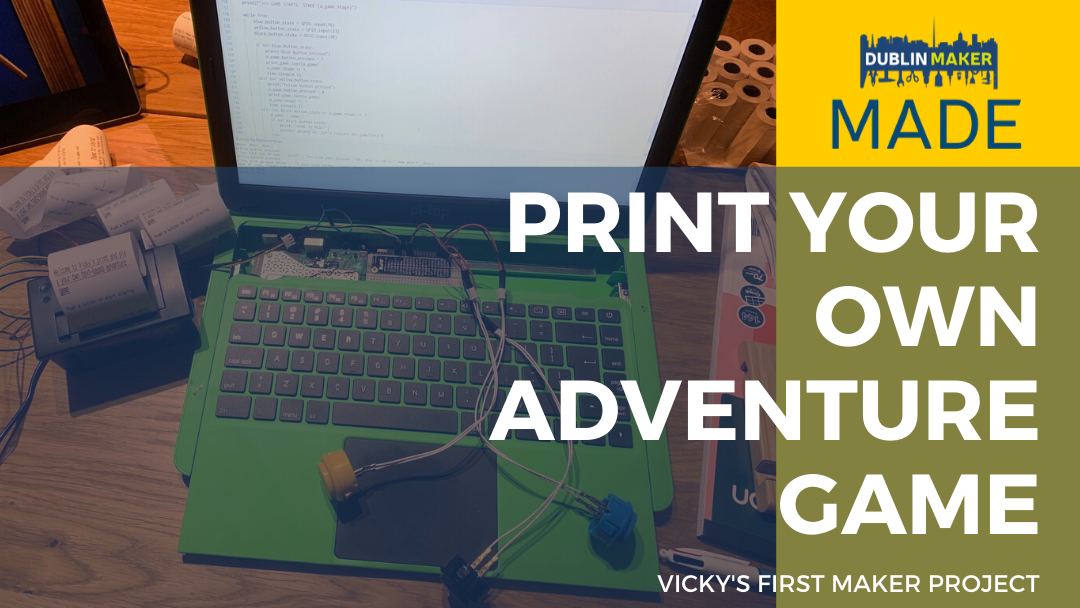 This week was meant to be my first time attending a Makerfaire, it was going to be in Berlin. Unfortunately it was cancelled due to COVID-19. 😢

I had a small project to demo and it was inspired by The Choosatron at Berlin Game Science Center, I had so much fun visiting it last year.

I had the Adafruit mini thermal receipt printer, a Raspberry Pi, arcade buttons and wanting to play more with CircuitPython to interact with these electronic components. As a newbie and from software background, I was more comfortable with coding, as you can imagine.

Have been working on this on and off since February this year, and I decided to why not get it all working properly even if Makerfaire Berlin is cancelled. 💪

I had a Pi-Top which has the Raspberry Pi 3 in it (thanks to Coding Grace), and used it prototyped the idea on it initially.

Ok, that was cool.

How this will work is, I have 3 buttons, a YELLOW (left option), a BLUE (right option) and a BLACK button (resets the game).

I put in some sample silly dummy stories so I can see how the game runs, it’s pretty short as I don’t want to waste too much paper. 🌲

I moved on to 3D print a stand for the 3 arcade buttons and a case for the thermal printer using the Prusa 3D printer (had fun building this last Christmas with my husband). Plus I decided to try out the Pi-Top which has the Raspberry Pi 4 in it.

So it’s all coming together.

After a bit of code wrangling as I wanted to add stories into a spreadsheet where I can pull the stories from and feed it to the thermal printer, it was all done. Here’s the final demo result. 🙌 😊

If you are curious, I have a longer write-up on the process and issues I came across via https://www.codinggrace.com/news/my-maker-project-print-your-own-adventure-game-2020-4-9/.

🤔 Anything else I would like to do now that it’s working? Well, what I would like to do is use just a Raspberry Pi (even a zero) and make a nice simple case for it, probably use cardboard or something as 3D printing a whole case uses a lot of material.